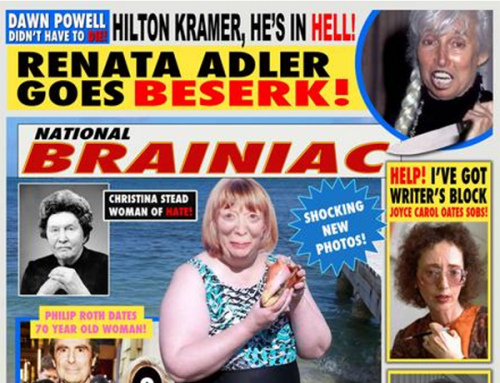 Joan Didion was an unlikely Twitterverse star this week when, at 80, the bird-like writer emerged as a model for the fashion house Céline. But an even more unlikely image of her, overweight on a beach, can be found in the artist and film-maker John Waters’ first gallery show in New York since 2009. The Photoshopped snap is the center of a fake tabloid cover, Brainiac, 2014, by Waters, which plays on “the idea that if intellectuals came out of their houses they’d have to worry about the paparazzi and what they’d look like in a bathing suit,” he explained in an interview with The Art Newspaper, to which he says he subscribes—along with the National Enquirer and the Hollywood Reporter. In the exhibition “Beverly Hills John”, which opens today, 9 January, at Marianne Boesky Gallery’s Chelsea space, his work mashes-up and distorts images, terms and tools of the trade from pulp fiction, contemporary art and Hollywood—worlds that Waters feels he has moved among seamlessly. One distinction he makes is that “in the film world, I have to pretend that a million people are going to love [my newest work]… If you tell the art world that a million people are going to love it, it’s really bad. You want the one, smartest, most powerful person to think it’s good.” Now, who could he have in mind?