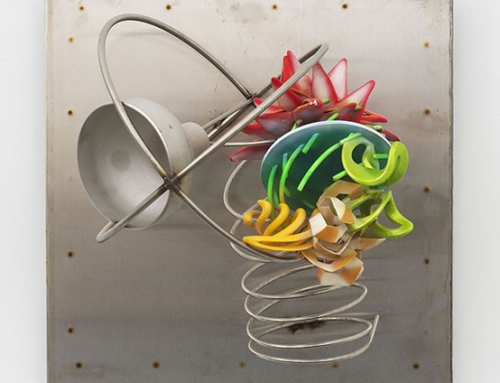 Frank Stella, 78, has been into 3D printing since before it was cool—namely, the mid-1990s. His latest exuberant abstract sculptures are the culmination of a singular artistic evolution in which the minimalist stripe paintings for which he became famous in the 1960s gradually gave way to complexity and relief.

The sculpture to the left, K.150, is one of three new Stella works to be shown in November at the Marianne Boesky Gallery in New York. “Frank’s always willing to try out new materials, new mediums, new paints,” says Ricky Manne, the gallery’s director. Stella begins such works by scanning assemblages of found objects—anything from springs to dog toys—into  a computer. The digital  form is then manipulated in both size and shape before being printed through a process called Rapid Prototyping. The resulting sculpture is then colored,  in this case with automotive paint. Among the latest in the artist’s “Scarlatti Kirkpatrick” series, K.150 is supposedly inspired by the Domenico Scarlatti sonata of the same name. The delicate and mellifluous composition has none of the explosiveness of Stella’s piece, but that contradiction seems in keeping with Stella’s lifelong ability to defy interpretation.