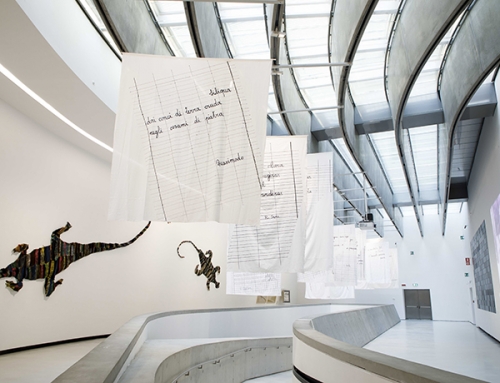 As with so many female artists of her generation, mainstream recognition has been too long coming to Maria Lai, the Sardinian artist who died in 2013 at the age of 94. Although she had exhibitions throughout her life, it was only in 2017 — with a showing at Documenta 14 and in the main exhibition of the Venice Biennale — that she commanded international attention. Lai is now the subject of an eloquent retrospective at Maxxi, the national museum of contemporary art in Rome, called Holding the Sun by the Hand.

Curated by Bartolomeo Pietromarchi and Luigia Lonardelli, the show covers what is thought of as Lai’s second period, from the mid-1960s through to her death. This was the moment she abandoned painting and started to work predominantly with fabric and thread.

Unfolding through Lai’s material translations of looms, canvases, books, maps, costumes and games, it takes the viewer on a journey through a galaxy of texture, motif, colour and shape — there are vast embroidered cloths hanging from the ceiling, miniature objects on plinths, constellations of sewn books. Such variety in scale and material is perfectly suited to the spectacular elliptical volumes of the museum’s vast gallery. (Designed by Zaha Hadid, Maxxi’s architecture has been known to eclipse less imposing occupants.)

Installed in thematic constellations, the show, in keeping with Lai’s own predilection for infinity, has no obvious beginning nor end. Officially, however, the first section is “To Be Is To Weave. Sewing and Mending”, a display of the loom-like objects that were Lai’s first forays into the world of weaving in the 1960s.

With strikingly unpredictable titles — some are untitled, others such as “Loom in Sun and Sea” (1971), “Loom of the Morning” (1969) and “Object Landscape” (1967) are clearly inspired by natural imagery — these sculptures are on one level travesties of their original inspiration. With their chipped, scruffily painted wooden frames, unfinished warps and snapped wefts, the spindly structures nevertheless enjoy a luminous ethereality, as if they are tools for a world still in the process of becoming, where perfection is less important than process and spirit triumphs over matter.

Indeed their creation signalled Lai’s own transition. Having studied at the Accademia in Venice under sculptor Arturo Martini, she had moved to Rome during the 1950s where she showed figurative canvases based on the landscape and people — shepherds, breadmakers, weavers — of her youth in a remote Sardinian village overlooking the sea.

In 1961, Lai stopped painting and started to explore the raw materials which had previously been the subject of her image-making — wood, bread, cloth, thread. For a decade, she showed nothing. Then in 1971 she exhibited her looms at the Galleria Schneider in Rome. Four years later, she brought out the body of work known as Sewn Cloths. Displayed on one of Maxxi’s long side walls, these textiles — patterned, angular scraps darned together into the mongrel children of patchwork quilts and geometric abstract painting — anchor her in the lineage of postwar Italian art. This was a moment when experimentation with materials existed alongside a respect for form in the works of artists such as Piero Manzoni and Pino Pascali (both of whom Lai credits as key influences).

Soon Lai found her own path. Although there were various tributaries, the axis of her inner world turned on her awareness of literature, both oral and written, as crucial human nourishment. Educated at home until she was nine years old, she described her childhood as a “great journey into my imagination”. When she was sent to school, she was “behind in everything” but one teacher, Salvatore Cambosu, introduced her to poetry “and the world became fascinating”.

There’s no question that Lai’s art was rooted in her arid, craggy Sardinian terra Lai’s love of poems and stories translates into artworks that act as illegible scriptures. Dramatic in its scale at 1.5m x 2.285m, her untitled 1989 wall-hanging evokes white pages covered in handwriting, but the paper is actually cloth and the words are threads whose knots, tangles and drips tease the reader with their tactile, tantalising abstraction.

Displayed within a cluster of central vitrines are smaller “books” made over the course of Lai’s last three decades. Some feature cloth pages painted in tempera in radiant Mediterranean hues, others spill over into bubbling waterfalls of thread, or are embroidered with visual images from the ancient fables Lai loved. Seductive anti- texts that seem to encrypt clandestine stories and suppressed memories, they are the fruit of an artist who once said as a child she was “illiterate but full of fairy tales”.

Four years before she died, Lai installed 13 looms in the Sardinian town of Aggius as part of an action that also included music, singing, poetry and nursery rhymes. Entitled “Essere è tessere. La tessitura dà spettacolo” (“To be is to weave. The weaving creates spectacle”), it is a reminder that weaving was more than Lai’s tool for making art; it was her way of stitching herself into the world. You leave this show aware that words are not the only way to tell a story. Few visual artists can offer more.