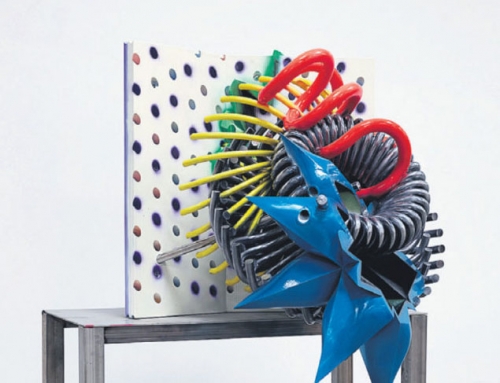 In 1981 art historian Douglas Crimp made Stella the poster boy for his essay “The End of Painting,” arguing that the abstract artist killed the medium with his late-1950s Black Paintings — terrific negations of the illusory depth of classical art and the feverish emotions of abstract expressionism — and then tried, beginning in the 1970s, to reanimate the corpse by cranking the picture plane out into three dimensions. Suffice it to say that the cigar-chomping artist has not troubled himself much with definitions of painting versus sculpture, instead noting, “Making art is complicated because the categories are always changing. You just have to make your own art, and whatever categories it falls into will come later.”

Upon entering Marianne Boesky’s first, smaller gallery, you encounter Creutzwald (1992), a roughly chest-high amalgam of buckled metal planes entwined by snarled steel tendrils. This is contrasted with K. 150 (2014) — brightly colored plastic coils colonizing a milky, perforated panel. While Creutzwald is jagged and rusty enough to threaten tetanus, you can sense its DNA in K. 150‘s smooth eruptions of form. Very different from the harmonic creases of John Chamberlain’s crushed car bodies or Richard Serra’s stately processions of corroded steel, the conceptual whipsaw here — between oxidized decay and chromatic effulgence — is typical of Stella’s lifelong search for abstract manifestations of intellectual metaphors, from references to Nazi propaganda in the Black Paintings to Moby-Dick in the 1980s to the current “K Series,” which is based on the works of an 18th-century Italian composer.

Through the narrow opening into the main gallery, you glimpse a huge farrago of ragged metal: Fishkill (1995), whose serpentine twists pull off the substantial effect of simultaneously expanding and crumpling. Lurking around the corner and exerting a sudden tug of aesthetic gravity, Puffed Star (2014) is composed of billowing aluminum protuberances, the uppermost points of which loft to the ceiling’s skylight. The space in the gallery feels disturbed, as if time has been reversed, with the artist creating a young and vigorous star pulsing with silvery energy in our current moment, while 20 years earlier he envisioned a collapsed sun, degenerate but still impressive in its scattershot volume and dead weight. (Crucially, one of the welded legs supporting Fishkill is bent and cankered with rust.)

Stella’s ever-evolving blend of elegance and cacophony has always possessed a sense of exquisite randomness, and in Puffed Star you can almost hear the eternal background buzz of the Big Bang, without which Earthlings — the only life in the universe yet known — wouldn’t exist. So maybe Stella got it right all along: The noise is every bit as important as the signal.