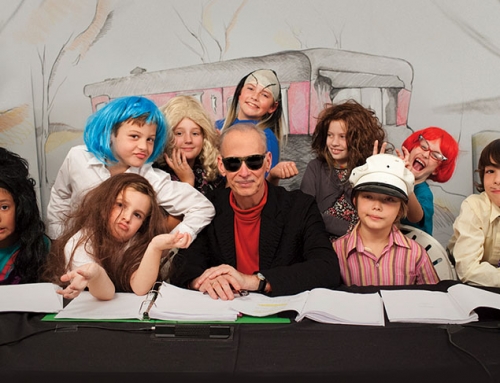 How does a movie about the “filthiest people alive” become family-friendly? Viewers will soon find out with John Waters’s “Kiddie Flamingos,” a video art piece based on Mr. Waters’s notorious 1972 film, “Pink Flamingos.” The 74-minute video will play on a loop at his coming art exhibition, “Beverly Hills John,” at Marianne Boesky Gallery in the Chelsea neighborhood of Manhattan.

The “Kiddie Flamingos” cast members — all of whom are far too young to watch the film they’re remaking — wear candy-colored wigs, cat-eye glasses and at least one pencil-thin mustache (drawn on, of course) to evoke their characters in a table reading of the new script. “I’ve always said that if you took out the sex and the violence, that it is a children’s story because it’s the battle of the gross-out, and that’s what most kids’ books are now,” Mr. Waters, above, said in a phone interview on Sunday.

To make the piece kid-friendly, Mr. Waters said he eliminated all obscenities and altered the script so that it told the same story, only in a more age-appropriate way. For example, instead of impregnating hitchhikers and selling their babies, the children steal talking baby dolls from wealthy families. Mr. Waters said he hoped the result is “even more perverse than the original, because it’s transforming innocence into a whole new kind of joyous, G-rated obscenity.” “Kiddie Flamingos” will be on view Jan. 9 through Feb. 14.