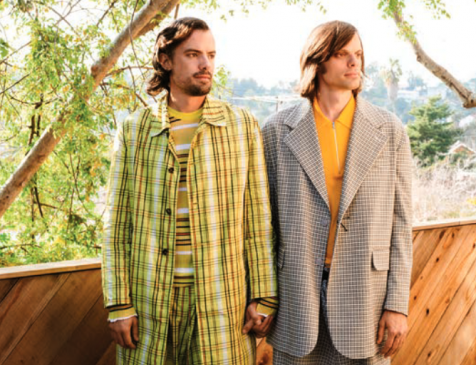 Typical California. It was a freeway mishap that started the whole thing. In 2010, Nikolai (who goes by Niki) and Simon Haas were driving along Interstate 10 between West Los Angeles and West Adams when the bed frame the fraternal twins were transporting slid off their truck and smashed onto the roadway. In general, Simon is considered the analytical, precise one, while Niki is the reactive, big picture guy. “[But] neither of us remembered to secure the fucking bed,” Simon says, then laughs, when we meet at his brother’s treehouse-like abode in Highland Park. This wasn’t just any bed frame —it was a midcentury marvel by Italian modernist architect Gio Ponti that the budding artists and designers, then 26, were repairing as a sort of tryout for the esteemed L.A. architecture firm Johnston Marklee. It helped, too, that the Haases had scored the gig on the recommendation of their friend, Spider-Man and The Cider House Rules actor Tobey Maguire. (The twins’ older brother, Lukas, is a successful actor and was part of Leonardo DiCaprio’s notorious 1990s entourage that counted Maguire as a member.)

What might have been a disaster turned into an opportunity. Rather than make the Haases pay for the damage (“We had no money whatsoever,” Simon says), the firm’s co-directors, Sharon Johnston and Mark Lee, asked them to produce three interior pieces for a remodel of the Baxter-Hodiak House originally built for Frank Lloyd Wright’s granddaughter and later redone by John Lautner. Simon wasn’t a builder, but he knew CAD, having studied at RISD. Niki couldn’t draw, but he had learned construction techniques with Simon from their father, a painter and sculptor.

The furniture pieces, including a teardrop plywood-and-resin coffee table, made an impression, and through word of mouth, splashy commissions began pouring in. Lady Gaga ordered monster masks for her Fame perfume campaign. Architect Peter Marino hired the Haases to design a steel ceiling that appears to ripple for the Guerlain store in Paris. Commune co-founder Roman Alonso had them pencil “cave paintings” of iconic Angelenos (Diane Keaton, Ed Ruscha, Abbot Kinney) in the lobby of the downtown Ace Hotel.

“We don’t have the typical success story,” Niki says, pacing in his living room with his son, Fox (now 17 months old), and a sippy cup in his arms. (The toddler needs a nap. Niki’s wife, Djuna, a wardrobe stylist, is not home, and the babysitter didn’t show.) The Haas brothers spent their early years in Los Angeles —where their mom, Emily Tracy, wrote for TV series like The Cosby Show —but then moved to Austin, where Tracy grew up, for what Niki calls “a supposedly saner lifestyle.”

“It was lots of unstructured time in our father’s art studio,” Niki says. The patriarch, German-born Berthold Haas, is a sculptor and painter who now lends a hand to some of his sons’ projects. “Playing with paints and materials and experimenting in dance and stonework and construction and music until we found our way forward.” The experiment was successful. After nine years of steadily gaining notoriety and critical acclaim, the Haases —who are represented by R & Company and Marianne Boesky Gallery —debuted their first solo museum exhibition late last year, at The Bass in Miami, featuring anthropomorphic hairy chaises, creature-esque beaded chairs and hand-layered liquid clay accretion vessels that make them the go-to surrealist fabricators of their generation. George Lindemann Jr., president of The Bass’ board of trustees, says of the figures, “It’s like you are being let in on a secret and invited into a fanciful world created by two brothers over their entire lives.”

Today, the 34-year-olds’ large-scale installations fetch as much as $2 million. And with a new collaboration with luxury housewares brand L’Objet, they’re branching into everyday home decor —though “everyday” is relative when you’re talking about porcelain salad bowls shaped like otherworldly moppets and spoons that squiggle like spermatozoa. The line comprises tableware, home decor, textiles and fragrance and followed extensive research and inspiration trips to Joshua Tree and, later, Portugal, where they worked with Elad Yifrach, L’Objet’s creative director, to sculpt and mold each prototype by hand.

“The collection transports people —to the Mojave Desert,to the stars, but mainly inside the wild fantasy realm where Niki and Simon live,” Yifrach says. “Our goal was to take those ‘out there’ ideas and make them functional and beautiful for practical use, and that’s where the real magic lies in this collaboration. It’s fantasy, but with a specific point of view.” Get the brothers alone and you instantly sense how distinctive their individual viewpoints are. Even physically they’re quite different. Simon is more classically good-looking, with high cheekbones and a neatly trimmed beard; Niki has a dreamier countenance, with great big eyes and flyaway hair. Simon is more Wacky Wacko, Walter Van Beirendonck and Kenzo; Niki loves vintage Dior and bell-bottoms. As their friend and artistic collaborator Johnny Smith puts it, “Simon is West Hollywood. Niki is a walk on a beautiful California trail somewhere.”

Niki makes one last effort upstairs to get Fox to sleep. “I’m gay, Niki’s not,” Simon says. “I’m more of a nerd, with processes that are very methodical and slow. Niki’s are more emotional and fast. I do lots of research and get obsessive. He’s more about vision and implementation. Also, Niki’s a jock. He plays ice hockey. I’m an alcoholic. That’s another difference. Currently I’m sober, going on two and a half years.” That last piece was a major shift. “I was off the rails for a very long time,” Simon explains. Despite the success and acclaim that came with high-profile gigs with Donatella Versace and Louis Vuitton, and a memorable 2014 showing at Design Miami/ Basel, he reached rock bottom in 2016 when he burned down his own bed. “I was super into psychedelics, ecstasy, weed, mushrooms, ayahuasca, OxyContin, everything. I would drink two or three six-packs every night and would just pee in the bottles and leave them next to my bed. I woke up one night and the bed was on fire and I actually put myself out with urine. My bank account was down to $80, and this was after we’d been making good money. I went and spent it on weed at MedMen and didn’t eat for three days.” He started going to AA meetings every day after that. Niki explains later that Simon’s sobriety has brought new energy to their work. “Simon’s hyperdependable and focused but also happier, which makes it easier to say, ‘What should we do now that we’re allowed to make anything we want?’”

The list is long. There might be an animated children’s program, a children’s book and a podcast on the horizon. Plus, plans for more art shows, including a solo exhibition at Marianne Boesky Gallery this fall and a special beaded project debuting at Art Basel Miami Beach. Niki —who cites Niki de Saint Phalle and Yayoi Kusama as artistic influences, along with “colorful, rad 1970s shit” like Sly and the Family Stone and disco —says his dream commission would be a big outdoor park, like Park Güell in Barcelona. “If I could be part of any scene at any time, it would be the old-movement surrealists with Gaudíand, later, Dalí,” he says. Simon —who’s a devotee of queer erotic art by George Quaintance, Tom of Finland and Stuart Sandford —would love to build a church “because art and design are already my religions, and Sagrada Familia is my favorite building in the world.”

Niki checks the baby cam app on his iPhone and sees Fox wide awake. A nap just isn’t happening today. He glances at Simon, who, in the knowing way the twins share, heads upstairs to grab his nephew so Niki can enjoy a second of peace. “I guess it’s like anything —having a kid, being a designer, an artist or whatever,” Niki says. “You figure it out as you go.”